Warning: Declaration of gtrans::widget($args) should be compatible with WP_Widget::widget($args, $instance) in /homepages/14/d94824441/htdocs/wordpress/wp-content/plugins/gtrans/gtrans.php on line 59
 Cultural Triangle and Dambulla Caves – Knobby News
Skip to content

We now in the middle northern area of Sri Lanka in an area named the Cultural Triangle because many ancient capitals of Sri Lankan empires are located. And also many ancient monasteries and other religious sites.

Louisa is writing about Sigiriya which will be posted soon. (Soon is relative as we currently don’t have an internet connection and are writing on our iPhones). Now a week later and I see that this hasn’t been posted, so here goes.

Sri Lanka has a mixed religious and ethnic heritage. There are still a few pre historic tribal people called the Veddahs who may date from the time when there was a land bridge to India. Two groups of Hindu Tamils from South India—the first came to northern Sri Lanka in over two thousand years ago and modern Tamils brought over by the Enlish to work the tea plantations. The predominate Buddhist Sinhalese who came from Northern India in the sixth century BC. And some Muslims traders who came about 1000 years ago. Many of the temples mix Buddhist and Hindu icons and practices. And both schools of Buddhism are followed, although Theravada is more widely followed than Mahayana. Almost forgot the European invaders—first the Portuguese, then the Dutch followed by the English which brought Christianity. Sri Lankans with European blood are called Burghers and they held power from Independence in 1948 until the late fifties when the Sinhalese took over which lead to discrimination against the Tamils. Which resulted in the Tamil Tigers revolutionary group which caused major havoc until a couple of years ago.

We haven’t been affected by the flooding, which is in the predominately Tamil areas. A major challenge for aid givers and the leaders of Sri Lanka. Sri Lanka is a third world country but shows signs of improvement. Some very good roads, many minor roads paved, lots of buses and tuk-tuk for public transportation. Many private motos, but not many private cars. Electricity most everywhere as far as we can tell. Some thatched roofs on out building, but otherwise tile or corrugated metal or some kind of composite.

OK enough social studies. After spending most of the day at Sigiriya we went to the Royal Rock Temple Caves in Dambulla. Five caves about six hundred feet above the generally flat plains. The caves have had significance for Buddhists for 2000 years, but most of what is here is generally 200 years old. Two of the caves have large reclining Buddhas and many smaller standing and sitting Buddhas. Most outstanding though is the wall and ceiling murals which are in good condition. The murals include scenes from Buddhas life and geometric patterns as well as dozens of Buddhas. 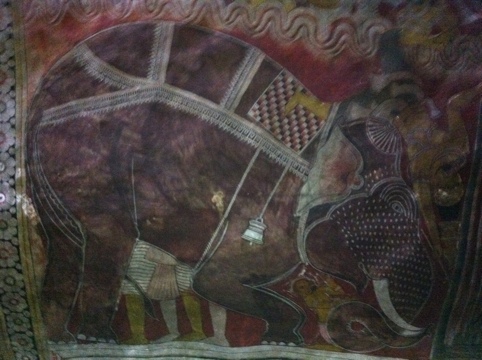 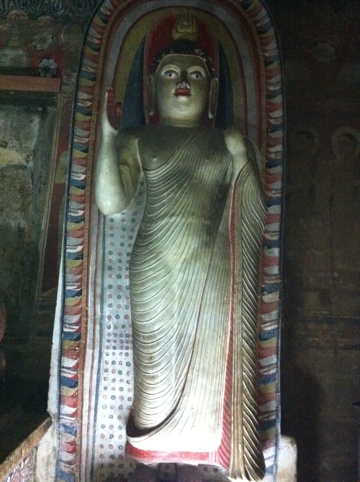