Warning: Declaration of gtrans::widget($args) should be compatible with WP_Widget::widget($args, $instance) in /homepages/14/d94824441/htdocs/wordpress/wp-content/plugins/gtrans/gtrans.php on line 59
 Ella, Sri Lanka – Knobby News
Skip to content

The day before yesterday we arrived by train in Ella which is at about 3000 ft. elevation. Considered hill country which where the English escaped the heat of the low lands. At this time of year the hill country is supposed to be cool and dry. However like every where else in the world, the weather isn’t following its script., and the two days we were there it rained hard in the late afternoon, and lightly at other times. Temperatures in the 70s and a bit cool at night. Tea plantations are a feature of much of the hill country. They make for interesting planting patterns and also a way of life. Pickers, mostly women, working rapidly to pick their 20kg per day. (We had met a family a few days earlier in botanical garden, and the mother was a tea picker and her handshake would put most men to shame.)

We went for a short hike up to Little Adam’s Peak. If the weather had been better we could have seen down to the ocean. As it was we had views of nearby mountains and Ella. On our way back down the mountain through the tea plantations we met a women posing for photos while picking tea. One has to earn money where you can. We stayed long enough with Louisa taking video that a couple of kids wandered up from a cluster of tea plantation housing. A 14-year old boy and his 18-year old sister. They invited us to their home and offered us tea. Eventually most of their family gathered—mother, father. middle sister. The plantation supplied housing looked to be two rooms of maybe 300 sq. ft. The kids English was quite good. We (Anita and Greg) showed photos from home and other adventures from their iPhones. The parents couldn’t follow well because of their lack of English, but the kids enjoyed it. Was odd to show photos of may Nepal trek because much of the culture is similar—tea pickers are Hindu (Tamil) as is the low lands of Nepal. And both have a heavy dose of Buddhism. But Sri Lanka is much better off than Nepal—GDP is two to three times higher. And they loved Anita’s photo of herself in a Sari. The 18-year old girl was in her final year of school and wanted to continue her education in social work or teaching, but it sounded as if her family couldn’t afford it. We didn’t ask what was likely to happen, but doubtful not anything using her obvious intelligence. As always we were charmed and pleased by the amazing hospitality of third world countries. Unfortunately all we had to offer in return were a few token pieces of fruit.

We enjoyed our two nights at the Hill Top Hotel—some of the best food we’ve had in Sri Lanka and a great owner/manager. One of the things we particularly enjoy is roti for breakfast, because the alternative is plain white bread. Here roti is a thick pancake made from unloved flour and coconut milk. We ate them like toast, but they eat it with curry. (Usual breakfast in our budget hotels is omelet, the aforementioned white bread, margarine and lousy jelly, and equally lousy tea or coffee.)

The next day (now yesterday), we made the 100km drive down to the southern coast, just outside Yala National Park. Not hot and humid, but not excessively so. Partly cloudy, but no rain so far. After many days in budget hotels we’re staying for two nights in a luxury resort. Pool (but with the occasional boar wandering through), but large buffets, house boys, etc. Our reason to be here is to take a safari in the national park. Not quite East Africa, but a wide variety of wild life none the less. Elephants, boar, deer, monitor lizards, crocodiles. water buffalo, mongoose, all kinds of birds, and the star, leopards. We got up at 5 a.m. to start and we we saw all but a leopard. Back for late breakfast, a quick swim, lunch, and off again at 2:30 for the late afternoon safari.

Greg and Louisa on yesterday’s late afternoon walk along the shore. 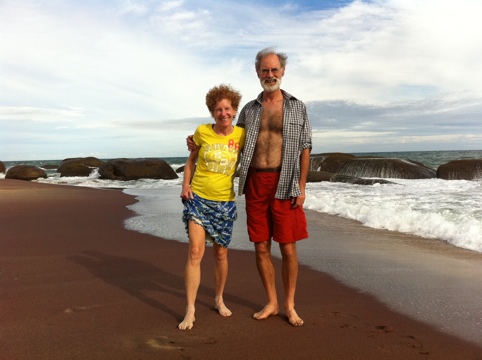 Other than Bob and Anita, we didn’t see any other resort guests on the beach. Worth it to see rocks along the shore, fishing village (only occupied part of the year and it had been wiped out by the tsanami about six years ago. Our resort suffered little damage, but one in the park a few km away was wiped out and 45 people died.)

One thought on “Ella, Sri Lanka”