Warning: Declaration of gtrans::widget($args) should be compatible with WP_Widget::widget($args, $instance) in /homepages/14/d94824441/htdocs/wordpress/wp-content/plugins/gtrans/gtrans.php on line 59
 Kataragama Puja – Knobby News
Skip to content 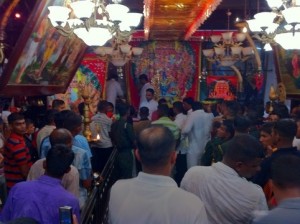 Quite the scene even on an off day. Three times daily pujas. And outside young men dancing widely for hours to a few drums. And apparently without any special fuels such as alcohol. Kataragama is one of the two top pilgrimage sites in Sri Lanka, the other being Adam’s Peak. In a big park like setting houses of worship for all religions and sometimes hard to tell if a facility is Buddhist or Hindu.

People are bringing offerings to a Buddhist temple and receiving a tika and other blessings. We’re now in Colombo and we were in Kataragama about a week ago.