Warning: Declaration of gtrans::widget($args) should be compatible with WP_Widget::widget($args, $instance) in /homepages/14/d94824441/htdocs/wordpress/wp-content/plugins/gtrans/gtrans.php on line 59
 Scarich – Knobby News
Skip to content

Beginning of the database now online, and the home page. Mostly data up to 1896 has been added and even that is incomplete. Trying to figure how best to present the data. Big plan is for a map.

Something that’s been the works for a while. But thought it time to introduce it, although nothing is ready to published. So this posting is as much for me to document the program before I forgot too many details of the journey. And it’s been fun.

Probably can say it started with our trip to Croatia in 2013 to Croatia with Gary and Mary. We decided to spend one day on the island of Bra? to see if we could find any remnants of Scarich relatives. That was documented in an earlier post and Louisa’s short video. We met three third cousins, Mila, Mirjam and Ana. Ana was the genealogist and was interested in where her great-grandfather living and worked in Los Angeles (LA). I did some research at the Los Angeles Public Library in their genealogy section and on Ancestry.com. Mainly LA city directories, but also draft cards which yielded a dozen or so addresses. Louisa and I spent a fun day visiting the sites, taking pictures and talking to a couple of local residents (and getting yelled at by some telling us we couldn’t take photos). We found many houses where Scarich relatives had lived in the Boyle Heights area of LA and nearby. All of the restaurant sites are in downtown LA and have been replaced by high rises or parking lots.

That resulted in a email exchanges with Ana and digging out of family photos which resulted in one photo of Nicholas Tade Scarich in front of a house which was clearly at 3730 Hammel Avenue.

In the spring of 2015, the Los Angeles Public Library had an exhibit entitled “To Live and Dine in LA.” (Don’t know if the link will die when exhibit ends.) The exhibit was a joint effort between the library and the Los Angeles Library Foundation. (Need to confirm the details of the support). The links led to an essay by Charles Perry, Food Historian and President, Culinary Historians of Southern California who contributed to the exhibit. I contacted Perry and he generously sent an article he had drafted on Croatian Restaurants in LA with the suggestion that the effort needed to be developed. Well, I thought that this might be fun. Expand beyond the Scarich connection and learn a bit more LA history. I envisioned the effort as being presented somehow on a map. About the same time, because I follow the blogs about urban life and transportation in LA and elsewhere, I saw a posting by Omar Ureta about a map he had developed showing when all the buildings in LA county were built. Ah ya, the map showed me the possibilities. I contacted Ureta via MaptimeLA, a group dedicated to helping people learn how to use maps to help Angelenos. Another breakthrough, maybe I could learn how to do what I wanted. I’ve attended three meeting so far getting overwhelmed with the many mapping software options, but even more importantly meeting a bunch of dedicated, interesting, mostly young people. I hope to contribute to their efforts. I’ve been experimenting with those software and am now also taking a class at Santa Monica City College on GIS, specifically learning ArcGIS. Coincidentally MaptimeLA is working on a project on old restaurants that still are open in LA using a list in an article by Nikki Kreuzer.

As I said at the start, no progress to show. Sign off for now. I expect to edit this posting as there are several details to confirm or links to be added. I may also add a post on the software journey.

The Scarichs are from Brač. The first of our line of Scarichs to come to California was Vincent Gregory Scarich. Not many of us have visited family in Croatia. My (Greg’s) aunt and uncle, Rita and Gerry, visited probably in the late 70s. And Uncle Nick, one of Vincent’s sons visited from time to time. But no one I talked to knew who or where they visited. I was always told I was named after my great-grandfather Vincent Gregory Scarich from the island of Brač. However I’ve never seen anything in writing that confirms that his name was Vincent Gregory. His Certificate of Naturalization from 1905 has Visko Skarich (no accents). Škarić is Scarich in Croatian, so Skarich is yet another spelling.

Before we went on our trip to Croatia we thought we’d try to visit some Scarichs if we could find any. My dad had some contact about 40 years ago, but never visited any relatives in Croatia. His uncle, Nick, had visited Croatia but neither my dad nor I could find any information on that. I tried one of my cousins since their parents had visited relatives in Croatia, but they didn’t have any information. I Googled and although I found plenty of Škarićs not much contact information or current information. The major of Split in 2000 was a Škarić and Split is the main port to catch the ferry to Brač. I also tried Facebook and found some Škarićs but not in Split or Brač. Nonetheless I contacted one, but never heard from her and real ized that I wasn’t likely to find any of the mostly thirty somethings on Facebook that would be interested in meeting us.

But in family papers I found that some distant cousins (Restovich) were buried in Postira, a town on the island of Brač. I also looked on a couple of genealogy sites but didn’t turn up anything. So we left on our trip with a plan to poke around the graveyard in Postira.

On our first full day in Croatia we were visiting a farmers market in Zagreb. Louisa saw some honey from Brač at a stand and the woman selling the honey said that there were lots of Škarićs on Brač. So we might find some, but I assumed that would be older non-English speaking and we wouldn’t learn much.

Ten days later in Split we decided to reconnoiter the ferry to Brač the day before we were to go. I went to the ticket office and Louisa started talking with a person in line for the ferry that afternoon. He was a Škarić.

The next day we caught the 9 am ferry and upon arrival drove to Postira and went for lunch. In talking to the waitress she related that although she wasn’t from Brač she knew there were Škarićs and suggested going about half a kilometer down the shore to a grocery store and ask about the Škarićs neighborhood that was nearby. A whole neighborhood! This is getting interesting. I suggested the village priest and we all agreed that was even a better place to start. She pointed out the steeple and after lunch we wandered up the hill to the church. No one in the church, but we saw a house that looked like it might be the rectory and called into the open front door. The priest came out and although he spoke very little English he got the gist of what we were after and brought out a big ledger book. I had a birthdate of 1859 and Vincent Gregory/Visko for a name. He started thumbing through the book and ran into about ten pages of Škarićs. The book appeared to have been recompiled about 50 years ago with more recent additions (the book was organized and all the old entries had been put in at the same time (we later learned that many of the church records were copied over when the communists took over and the originals hidden away). The priest finally homed in on one page and although the birthdate differed by a year from what I had, and the first name was Vicko not Visko, but seemed like a reasonable variant. No middle name either. He then got kind of a knowing look and he went to make a call. He said two o’clock and I talked to Mila, my (third) cousin would said she would come by in an hour. During the hour Father Ton?i Jelin?i? brought us some homemade wine to drink.

An hour later not one but two cousins showed up and soon their cousin soon showed up. They were all females in their mid-fifties and spoke fluent English. We talked for a while and Mila invited us to her house for happy hour. It turns out their cousin, Ana, is the family genealogist and had a partial copy of the family tree. Up until then we weren’t convinced that we had nailed down the relationship, but her tree had Vinko Juraj, a brother of their great-grandfather. And eventually I remembered when I was about seven I met a relative from Bolivia, Sonja. They had met Sonja and her son, Vincent, who visits Brač every couple of years. With all these connections we agreed we must be cousins. 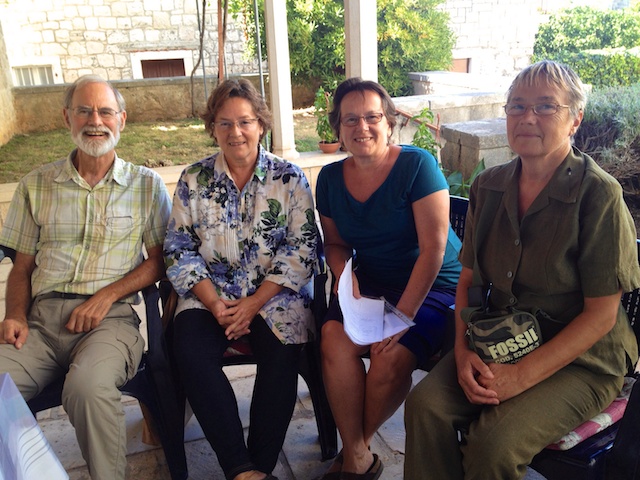 Mirjam, my other third cousin, met and married an American in college in Zagreb, and has lived in New York ever since. Her daughter, Anya, was there also and in fact visits every summer (except for two years during the war).

The next day, Mila took us for a tour of our neighborhood, called Škarića Dvori. Dvori we took to mean neighborhood of the Škarićs. She pointed out numerous building, several plaques celebrating famous Škarićs. We met one older couple. He is a Škarić but spoke no English.

Obviously we learned a lot more about the family than I’ve written about here. The cousins are all generous and interesting. We had a great time and will stay in contact.

We’ve posted photographs from the whole trip to Croatia on our to our website here.